The Tribal special project is an initiative of Kudumbashree in collaboration with the Tribal department to address the special issue of the tribal population  of the state, in a systematic manner. The project primarily targets at bringing the marginalized tribals under the aegis of the Kudumbashree network and provide them with facilities which were otherwise less accessible or denied, as part of its poverty eradication mission.The objectives of the mission is planned to be achieved with the active convergence of various government and non government agencies as well as departments. The project was initiated as a pilot in select 10 panchayats of 4 districts namely Idukki, Wayanad, Palakkad and Kasaragod in the first phase. In the second phase the project was expanded to 10 selected panchayats of the remaining district excluding Alappuzha, owing to less number of tribal inhabitation in the district. In the third phase the project has been expanded to all panchayats with tribal inhabitation.

Community mobilization and NHG formation is important for people- centered, integrated development. It is a process for empowering local communities especially vulnerable groups like tribal and combining awareness creation, self organization and action so that communities can work for changes that will benefit the social, emotional, financial and physical needs of beneficiaries. The Tribal special project facilitates the creation of ST NHGs as well as at ADSs, if necessary in areas where there are more than two Tribal NHGs. The project provides a corpus fund of Rs. 10,000 at all newly formed ST NHGs. Micro finance and Micro enterprise activities are given special; focus among the tribals as part of the project activities. Measures have also been taken to ensure cent percent tribal participation in the MNREGS actives. Formation of special Ashraya projects, provision of supplementary food for the malnourished aged, infants and adolescent girls, formation of ST Balasabhas and adolescents club, holistic health programme, etc are some of the highlights of the project.

The past 10 years, about 116356tribal families were covered under 6211  NHGs under the project. Formation of NHGs alone was not the prerogative of Kudumbashree in tribal areas. It is such instances that prompted Kudumbashree to form Special Ashraya projects for tribal beneficiaries. State Kudumbashree Mission has sanctioned 107 Special Tribal Ashraya Projects with 5120 families from districts.

During this period 43556 Women got registered under the MGNREGS. Efforts were also undertaken to train the women in different skills which could help them to start their own micro enterprises so that they needn’t depend on somebody else to provide them opportunities for a livelihood. The skill development programme is gaining a steady momentum in the districts as more and more women come forward to initiate micro enterprises on their own. By this process 435 Group Micro Enterprises and 131 Individual Micro Enterprises started along with 2035 Joint Liability Group (JLG) groups. Training programmes were also given to NHG functionaries in maintaining records and convene meetings regularly. Corpus fund was also distributed to newly formed NHGs to ensure the sustainability of activities associated with NHG formation. General trainings and awareness classes for women and teenaged children, based on specific subjects and medical camps were also a regular feature of activities undertook for tribes by the mission in Kerala.

Tribal special project facilitates the creation of ST NHGs as well as At ADSs, if necessary in areas where there are more than two Tribal NHGs. The project provides a corpus fund of Rs. 10,000 at all newly formed ST NHGs. Micro finance and Micro enterprise activities are given special; focus among the tribals as part of the project activities. Measures have also been taken to ensure cent percent tribal participation in the MNREGS actives. Formation of special Ashraya projects, provision of supplementary food for the malnourished aged, infants and adolescent girls, formation of ST Balasabhas etc are some of the highlights of the project.

Aims and objectives of the interventions are:

• Building up of powerful and effective exclusive institutions of women from the tribal communities who should develop negotiation power, ability to critically analyze their own situation and collectively work towards social transformation

• Institution at the Ooru (hamlet) level and ADS level for tribal women to enable them to access all entitlements and schemes of each department and engage in the proactive process of preparation of tribal sub-plan.

• Institutions should have the ability to prevent social issues like child marriage, domestic violence , trafficking and other forms of violence which affect the status of women

• Skill training to youth to save them from unemployment, despondency and alcoholism. • Livelihoods in agriculture and micro-enterprises that would lead to economic development

• Funds disbursed to the community

Kudumbashree model of poverty alleviation was chosen as the method of building social institutions. The NHGs were in a very dismal state and the groups had to be renewed. The Adivasis naturally felt distanced from Kudumbashree for a variety of reasons. So it was decided to have exclusive institutions for the tribal communities. Social mobilization, institutional building and capacity building in order to enable the community to access their rights and entitlements were the basic foundation of the project.

Community Cadres – the Backbone of the Process

The most important strategy and strength with respect to the entire project has been the selection of Animators from the tribal community and the capacity building programmes for the community cadres. The mobilization, institution building was successfully accomplished as the animators belonged to the community, spoke the same language and were well versed in the social and cultural background and needs of the community. The mobilization and institution building was accelerated as the animators understood the pulse of the community and the strategies to be adopted. Capacity building for the cadres has been a continuous process with constant reflection and review meetings where conceptual clarity about the project was achieved apart from the thematic training on agriculture, natural resource, education, health, gender, etc. Through the capacity building process, the Animators have been strengthened to access their rights and entitlements and strengthen the institutions to raise their voices and assert their agency and access their rights. They support the capacity building programme in the field. All the community cadres belong to the respective tribal communities and speak the Adivasi dialect. All the thematic trainings are held for the Animators first and they in turn conduct trainings in their respective areas and function as catalysts and social change agents.

Capacity building programs have been facilitated for NHGs, ADSs and CDSs office-bearers and members. Trainings have been held to explain the non-negotiable principles and various activities like community kitchen and health interventions. Women were trained in topics related to ADSs formation, roles and responsibilities of these social organizations, management of corpus funds to the community and book-keeping. Women have been trained in social development and livelihood aspects. Trainings have been held with respect to natural resources and agriculture with focus on organic farming without lethal pesticides and chemical fertilizers and other agro-chemicals.

The number of trainings on various subjects which the Animators, CRPs, NHG, ADSs and CDSs members, farmers, mothers, adolescent groups received are numerous and comprehensive, holistic and educative.

Some of the most important subjects dealt with in the training programmes are:-

•    Management of Funds, Book keeping, roles and responsibilities, the project rationale, main aims and objectives and also the method of implementation through exclusive Adivasi women’s collectives.

•    Role of the mothers in monitoring the schools and hostels and focusing on universalizing enrolment, retention, quality of education, etc.

•    Training by traditional healers to form producer groups and JLGs under MKSP and explain the concepts and work under MKSP.

•    Child rights, life skills and campaign for suicide prevention using various participatory exercises and one to one interactions

•    Training for the CDS and ADS members and Bankers on the objectives and rationale for the comprehensive development of the tribal community and need for convergence.

Kudumbashree with its core mission to wipe out absolute poverty through women empowerment has indeed touched many lives through its integrated, comprehensive approach. Thousands of the poor and the marginalized population are building their lives, their families and their society through these NHGs

Micro Enterprise and Agriculture based activity are creating sustainable livelihoods in tribal sectors. This is one of the major programmes of Kudumbashree Mission. The Mission also provides hand holding support to the enterprises analysing the specific requirements of enterprises. This constitutes training, financial support, marketing support & hand holding support for a period of six months through Micro Enterprise Consultants (MECs) to the enterprises. Moreover – Joint Liability Group formed for the promotion of Agriculture activity in tribal sector mainly Paddy and vegetables cultivation.

Social Development is the process of prioritizing human needs, in the growth and progression of society. This focuses on improving the lives of regular citizens, especially the poor, to make society a better place to live for everyone. Here people are placed at the centre of development. Kudumbashree through its social development initiatives, aims to address the specifically vulnerable group in society ie, Schedule Tribe. Gender training has been facilitated for Animators where the major discussions focused on social construction of gender, natural resources and gender, poverty and gender and agriculture and gender, women and division of labour. As a follow –up on the discussions about gender, several interventions were made in the areas of domestic violence and alcoholism, dropping out of children from schools, child sexual abuse, trafficking, child marriages, alcoholism, etc.

In order to solve the acute problem of unemployment among the youth in tribal area, Skill Development trainings were undertaken with support Deen Dhayal Grameen Kousalya Yojana( DDU-GkY) programme throuogh Kudumbashree. The major trainings were on, automobile works, plumbing and fitting, hospitality management, office assistant, tally accounting, office management, etc. Some of the batches were formulated exclusively for the tribes. There is a 4 % reservations in the agency to ensure the admission to tribal candidates. 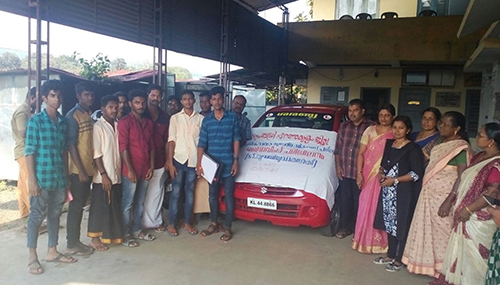 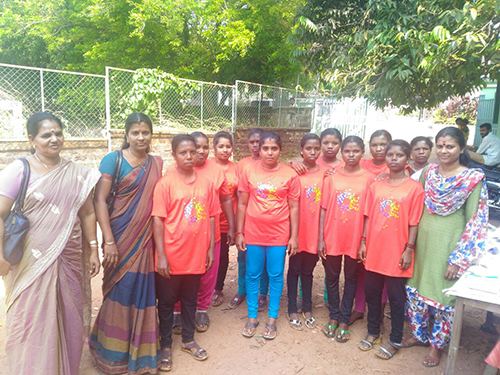